One of Tesla’s early access program users shared a video last week of their Model 3 automatically stopping at an intersection with a red light. Now, thanks to a leak of what purports to be the owner’s manual with details of the feature, we know how it works, and it’s just a bit more complicated than bringing the vehicle to a halt when the light turns red. Tesla has not confirmed or denied that this manual is official.

Build Your Own (Paper) Tesla Cybertruck

According to the manual found by a person by the name of Tesla hacker Green, when the feature is enabled, the vehicle is primed to stop at every intersection with a traffic light. Even ones with green lights. That would explain why the video showed Autopilot stating it was going to stop ahead at an intersection that had a green light. To override this, according to this document, the driver needs to depress the accelerator or press down on the gearshift lever to continue through the intersection. If the vehicle decides it’s still unsafe, to keep rolling the driver needs keep depressing the accelerator. 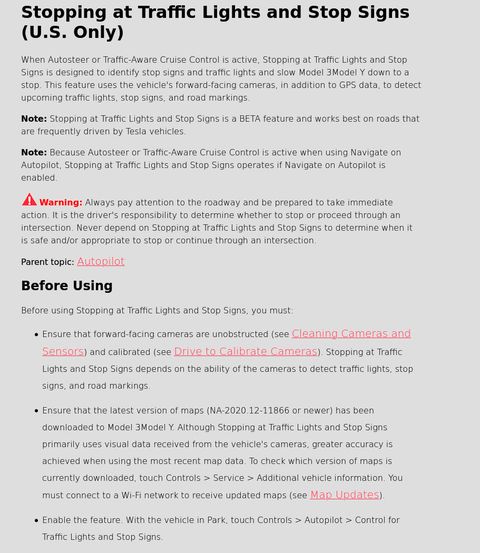 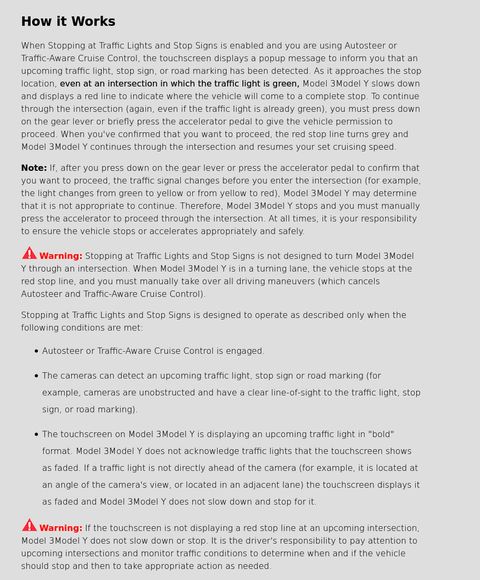 After sitting at a light, once the light turns green the driver needs to depress the accelerator or push the gear lever down to start the vehicle rolling. If the light is still red, the vehicle will ignore your action and stay put. If for some reason you still want to proceed (to make a right turn on red, or if the vehicle is confused by an intersection with multiple lights), the driver can depress the brake to cancel Autopilot.

We also learn that the system is only available on Model 3 and Model Y vehicles. It’s unknown if Model S and Model X support will come later. It’s also unclear if this feature will be widely available via the next Autopilot update. While reports indicate that it will be coming, Tesla has not replied to our queries about the feature and its timeline.

Regardless of whether it appears in the next few months, the feature is one step closer for the company for its promised Full-Self Driving (FSD) feature. The $7000 option would allow the Tesla to drive completely on its own in certain circumstances without the driver needing to pay attention to the road or keep their hands on the wheel.

For now, Tesla notes multiple times in these manual pages that the vehicle is completely under the control of the driver and that they should keep their eyes on the road and hands on the wheel.