A tornado damaged a factory in South Carolina last week owned by BorgWarner, the supplier of transfer cases for Ford, Ram, and Toyota trucks. As of now, the loss won’t affect the automakers’ truck production because plants are currently shut down because of the coronavirus pandemic. But if the South Carolina factory isn’t up and running by the time the three automakers resume production, truck production could be affected.

Fiat Chrysler has extended its plant shutdowns through May 6, and Ford recently announced that it is suspending production at its plants in the U.S. and Mexico indefinitely. Toyota has said it will resume production on May 4 at its U.S., Mexico, and Canada facilities.

A transfer case transfers power from the transmission to the front and rear axles through drive shafts and is essential on four-wheel-drive vehicles. The three automakers rely on BorgWarner for transfer cases for the Ford F-150 and Super Duty trucks plus the Expedition, Explorer, Transit van, Lincoln Navigator and Aviator; the Ram 1500; and the Toyota Tundra.

Michelle Collins, a spokesperson for BorgWarner, told Car and Driver that the company is “focused on developing plans as quickly as possible to bring the site back online, which will include contingency plans in the event the rebuilding effort is estimated to take longer than the sustained closure due to COVID-19.” 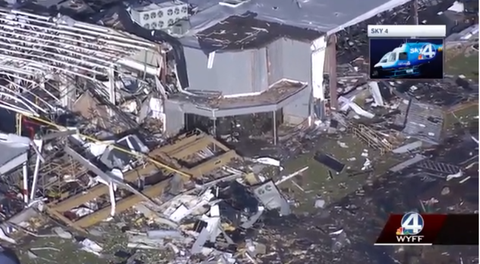 Tornado damage at the BorgWarner plant on April 13, 2020.

Ford filed a report with the Securities and Exchange Commission on Friday that claimed the “company’s assets” had been damaged at the BorgWarner plant, and that “the time to resume operations, partially or in full, cannot be estimated.”