A dispatch from the land of the minivan, for those of you whose experience with family haulers is limited to occasional rides in your aunt’s 10-year-old Kia Sedona: things have gotten totally out of hand. Brands that were building minivans in the heyday of the genre have gotten out of the game. Those left standing are engaged in an arms race, and no one’s talking disarmament. When Toyota launched the fourth-generation 2021 Sienna this week, the automaker unveiled its newest weapon: second-row captain’s chairs with 25 inches of sliding space and built-in leg rests. There aren’t many cars with built-in leg rests. The $203,545 Maybach S650 is one. See what we mean? Totally out of hand.

The second-row seats aren’t the only battle that’s raging in the minivan wars—though, if we’re keeping track, neither the Chrysler Pacifica nor the Honda Odyssey (the Sienna’s newest and best competitors) has a fold-out ottoman. The Pacifica’s major artillery in the seat department is its Stow ‘n Go system, in which both rear rows fold into wells in the floor to create a completely flat load surface. Honda’s seating innovation is a second row in which the captain’s chairs can slide sideways, allowing them to be positioned right next to each other or on opposite sides of the cabin with an aisle (or the removable armrest/jump seat) between them.

All three minivans have available back-seat entertainment systems. The new Sienna’s is an 11.6-inch 1080p screen; the Pacifica offers two 10.1-inch screens mounted on the back of the front seats; and the Odyssey has a 10.2-inch roof-mounted center screen. If you’re reading this, there’s a decent chance that those screens are all bigger than the one on the TV you grew up watching, and they’re almost definitely higher quality.

For 2021, Chrysler Pacifica Gets All-Wheel Drive

The screens are just the opening volley in the infotainment fight; USB ports are another zone of contention. The Odyssey can have up to eight. The Pacifica has 12. The Sienna has seven, leaving open the possibility that a passenger in a full Sienna could find themselves without their own personal charging port (all three of these vans can seat seven or eight people, depending on seat configuration).

Counting cupholders exposes the rococo nature of the minivan wars. The Pacifica lags the competition with 13 cupholders, or 1.63 per possible passenger. The Odyssey’s 15 cupholders can accommodate 1.88 beverages per passenger. The 2021 Sienna will have 18 cupholders, or 2.25 per passenger in a fully packed car. Even for the seven million American families with three or more children, 18 cupholders is a needless excess. With that many open drinks, you’ll need to make a pit stop on the way to soccer practice.

While we’re on the subject of needless excess, you can find an available built-in vacuum in any of these three vehicles. The Sienna has an in-car cooler, too, in case you’re transporting center-console-size perishables on a long trip but don’t feel like lugging freezer packs around. 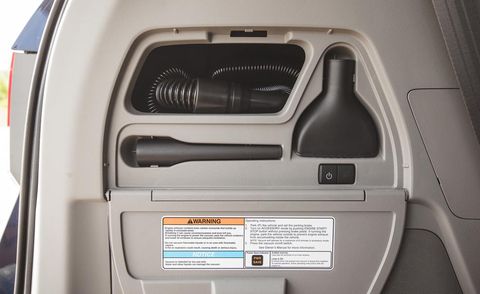 All three minivans are based on a front-wheel drive platform. The Sienna and Pacifica have optional all-wheel drive. The Sienna will be hybrid-only starting in 2021, but the 243-hp powertrain is a version of Toyota’s Hybrid System II, which has been around since 2016. The Pacifica comes standard with Chrysler’s 287-hp 3.6-liter V-6 engine, which has been powering FCA products since 2011. The Pacifica has its own available hybrid powertrain, but this one is a plug-in with 32 miles of electric range. The Odyssey is the only one in this bunch with just a single powertrain to its name. It is powered by a 280-hp 3.5-liter V-6 engine.

The only apparent truce in this conflict (aside from the necessary adherence to the double-sliding-doors principle) is in the active safety, where these three vehicles all provide a high level of standard equipment. The Pacifica and Sienna come standard with forward collision warning, blind-spot monitoring, and rear cross-traffic alert, while the Odyssey has all three in all but its base LX model.

Toyota hasn’t released full specs for the new Sienna yet, so we can’t compare it to its rivals in cargo space or legroom, but minivans in general are more spacious in both metrics than SUVs in general, thanks to their low load floors. The Sienna’s $35,000-to-$45,000 price range puts it in the same airspace as the Pacifica. The Odyssey tops out at $48,540 but starts significantly cheaper than either the Pacifica or Sienna at $31,910. No matter the price, the battle for minivan supremacy means that you’ll end up with a car that has more standard features than some apartments, and might even be cheaper by the month.