We recently stumbled upon an advertisement for a 2020 Dodge Charger Hellcat Widebody (pictured above) being sold for $114,215 at Suburban Chrysler Dodge Jeep Ram of Troy, Michigan. A brand-new Charger Hellcat Widebody does not usually go for that much money, so by this point, our interest was piqued, and we decided to look into it. Turns out that it was a special Dodge Charger Hellcat Widebody Daytona Edition, of which only 501 were produced at Dodge’s factory in Brampton, Ontario, where all Challengers and Chargers are built. And it was not the only dealer charging six figures for a Daytona Edition Charger. Sure it’s a special edition, but does that really justify its being priced the way a Dodge Viper was a few years back? 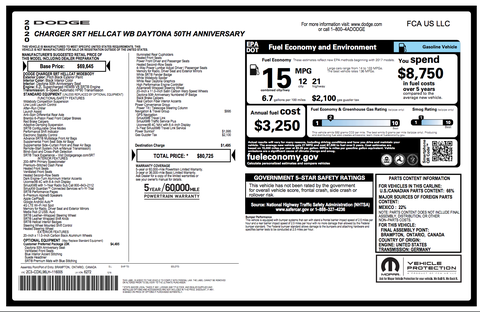 The window sticker of the black Daytona Edition Hellcat at the Fremont Dodge dealership places the car’s MSRP at $80,725. This price includes the base price of the Charger Widebody Hellcat (including the gas-guzzler tax), $1995 for a power sunroof, $995 for navigation, and $4495 for the Daytona package. That package includes the special edition’s blue and black interior, white Hellcat badges, a white rear fender stripe with Daytona graphics, a white rear spoiler, carbon-fiber interior accents, silver wheels, and an engine upgrade that bumps the supercharged 6.2-liter V-8’s power output by 10 horsepower to 717 hp. The total markup from the MSRP on the Daytona Edition at the Fremont dealership is $32,930.

A spokesperson from Dodge said that dealerships are free to charge as they please for the cars they sell, since they are considered to be independent business owners.

This isn’t the first instance of extreme car markups that we’ve encountered as of late. We’ve seen markups on the Toyota Supra and Dodge Demon, which came out two years ago. Corvette owners went out of their way to combat markups on the C8 generation by creating a list of dealerships that were and were not selling the newest mid-engine Corvette at sticker price.

At the end of the day, of course it all depends how badly a given consumer wants one of these 501 special-edition cars. Some people would be willing to pay six figures for a Dodge Charger Hellcat Widebody Daytona Edition and some wouldn’t it’s a free country.